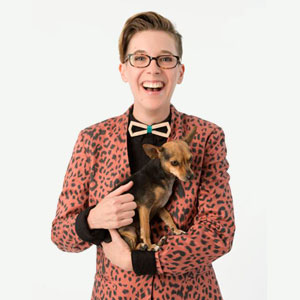 She's also been on TV all over the darn world, including on Last Comic Standing and The Late Late Show in the U.S., as well as in Canada, Australia and the UK. Her video "Straight Men, Step Your Game Up" has over 46 million views. Melbourne's The Music calls her latest show, Post Joke Era, "a virtuoso display of smart, slick, silly brilliance - a metaphorical (and literal) mic-drop of a show," giving it five stars, while the UK's Chortle calls Smith "always relevant, but never reverent". The UK Telegraph says she's "Smart. Very funny. Effortless charm lets her get away with murder." She's never actually murdered anyone.

Food and Funny deals includes a $25 gift certificate from one of Emma's Back Porch or the Pepperwood, and one ticket for the included show.

View all Food and Funny Deals

Take your ticket or voucher to the participating restaurant; your $25 voucher will be taken off of your purchase and you will receive a wristband that will be used to access the show and your reserved seat.

Reserved seats are held up to 15 minutes before show time.

Best of the Fest Show